7 Tips to Ace Your Next Job Interview Over Zoom

You’re focused on your laptop. TV is off. Phone is silent. You’re trying not to focus on the groan of your radiator pipes or your roommate singing poor renditions of Lady Gaga songs in the shower.

The Zoom window on your screen is showing a woman in her mid thirties wearing designer glasses and a pinstripe suit. She talks confidently into the camera as if she’s done this hundreds of times before. She probably has—just the past week.

You can see why a Fortune 500 company hired her to lead their recruiting efforts.

You feel off your game today. There is a microsecond delay in the audio that is shaking your confidence as you interrupt each other a couple of times.

It’s your fifth Zoom interview this week. Being stuck at home during a pandemic, talking to screens and spending little time outside is enough to make anyone go crazy. Not feeling your best adds to an already creeping feeling of dread.

You get the feeling this isn’t going well. You’re worried you won’t get the job offer.

If you're seriously interested in fine-tuning your interview skills, check out our flagship course Owning The Interview.

Owning The Interview arms you with vital insights into how recruiters choose, assess and hire candidates.

But don't just take our word for it… find out for yourself.

The New Superpower of The Digital Economy

Does this feel familiar? Well you’re not alone. According to Tech Republic, 86% of companies are now conducting interviews over Zoom, so everyone is trying to get up to speed on how to best tackle them.

And better to start now, because virtual interviews are here to stay.

So you have two options: either curse technology and complain that you make a much better impression in person. Or you can read this quick guide on how to master the art and science of Zoom interviews.

It might be the highest ROI activity that you can possibly do.

Think about it: if you get good at doing Zoom interviews, the world opens up to you. You can live and work wherever you want, because you will always impress on a Zoom interview.

Master this, and you will be able to write your own ticket in life.

But before we walk through the best practices, we should note that much of what we advise sounds like common sense. But often, ‘common sense is not that common.’ 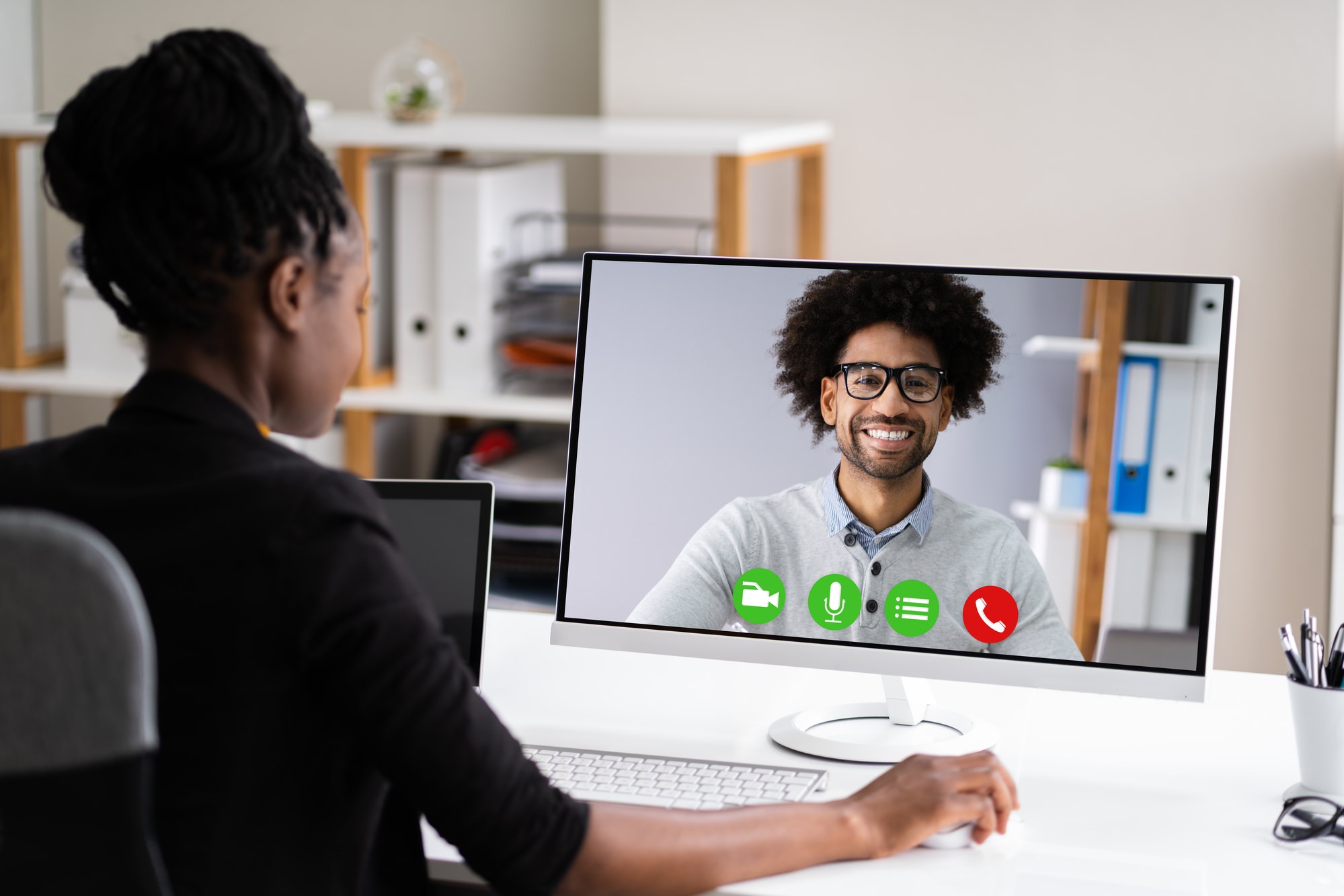 Interruptions seem to always happen at the worst times. The phone rings during your interview and seems to ring for half hour. Ten minutes later the UPS man arrives and leans on the doorbell for what feels like an eternity.

How does all this activity squeeze into the one thirty minute slot during your day where you needed absolute silence. And, more importantly, how does all this chaos come across to the interviewer?

Answer: it’s a major distraction and likely portrays a person who can’t sufficiently organize their life.

So set yourself up for success by telling your roommates to ease up on the Lady Gaga, leave a note at the door asking that the doorbell go untouched and put your phone in silent mode. This way you can focus and make a great first impression.

After you arrange for the proper environment, you need to take care of your appearance—your clothing and your posture.

First, dress for success. Your dream might be to work at your kitchen table in your pajamas, but you should look more put-together for your interview. This means different things for different people, but you know when you have put the effort in to make a good first impression.

Not only do you want to send a strong signal to the interviewer, but people feel more confident and professional when they dress their absolute best. Research done by behavioral psychologists proves that what we wear changes our mood. You might feel a bit silly pressing your best clothes to chat with someone on a computer in your own home, but that’s a small price to pay for feeling sharp during the interview.

Speaking of getting the edge, it has been proven that sitting and slumping makes us sluggish, while standing with good posture releases powerful bio chemicals.

If you can, stand during the interview. If you don’t own a standing desk, get creative and place a stack of books or rest your laptop on a box. Aim to have it around sternum level with the top of the screen level with your forehead.

Standing with good posture will improve your energy and give your brain more oxygen, and you’ll perform better.

Plus, wouldn’t it be great to no longer have to sit slouched in an interview chair, worrying about where to place your hands? 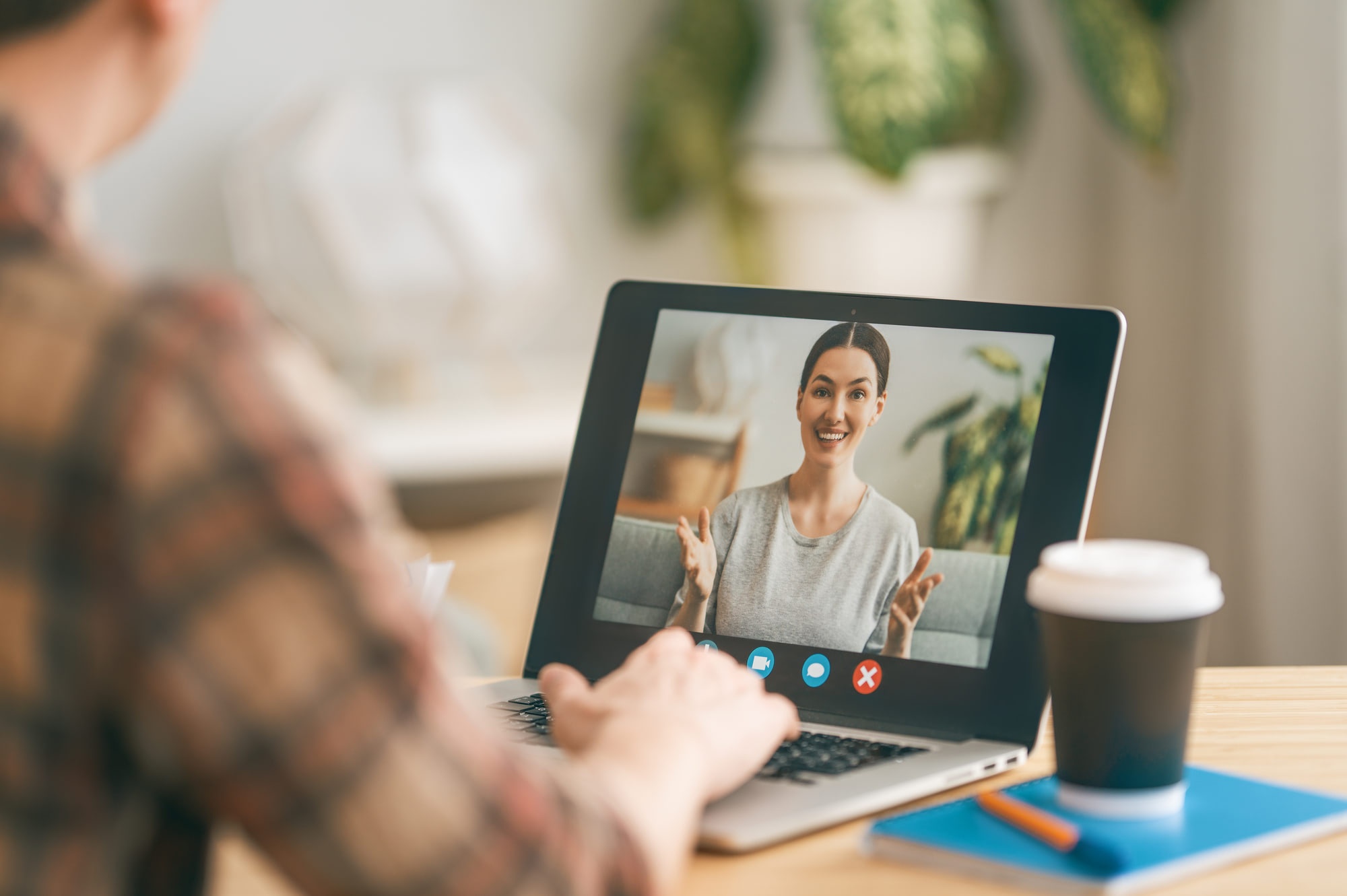 During a video call, people not only see you, but they see what’s behind you. Just like you don’t want a loud roommate or the doorbell distracting the interviewer, you probably don’t want them inspecting your three-day-old dirty clothes pile either.

Golden rule: make sure there is nothing in the background that might distract the interviewer—no broken windows, damaged furniture, or piles of laundry.

As you’ve probably seen in the media, many Zoom interviews are done in front of bookshelves or generic parts of a home / apartment. The key here is having it be clean and distraction-free. Even just a neutral background such as a plain white wall or red bricks is great for an interview.

We’d also advise against having a window behind you because it could leave the interviewer talking to a dark outline.

There’s no need to buy a professional set up with a light box and a screen. Just make sure you don’t have a light directly above you—it will either give you a shiny forehead or make you look as if you’re about to sing a solo.

Having a window in front of you is a good idea. The natural light will illuminate your face.

You may have heard that people who work from home always arrive late. It might seem ridiculous that someone with a 15-second commute could be late, but we’re often over optimistic with our time estimations when we don’t have to travel.

Unlike an in-person interview where you want to be 10–15 minutes early, you want to be one minute early or right on time. Why not earlier? Well, because often an interviewer will use the same virtual room for multiple meetings / interviews and you don’t want to accidentally show up when you’re not expected. So you can be at your computer 15 minutes early, but we recommend logging in right on time (or one minute before at the earliest).

Being punctual sets the tone for the interview by signaling your interest in the position and your organization skills. Also, if the interviewer is late, it might even give you the upper hand.

This is the great thing about Zoom interviews—you wouldn’t be able to have pre-prepared notes with you in a face-to-face interview. But in Zooms, you can!

But where should you have your notes? You can either have them written on a piece of paper to your side or have them in an electronic document.

If you choose the second option, it’s better to have the notes on your phone rather than on the machine you’re using for the interview. You don’t want to type anything during the interview—the click of the keyboard is distracting and a dead give away that you’re doing something else.

And you don’t want to be toggling between screens during the interview.

Final tip on the notes: write them in bullet form. Ever been to a lecture where the speaker reads verbatim from a webpage or notes? It’s super boring. People can tell if you’re reading a full text like a script, unless you’re a great actor. 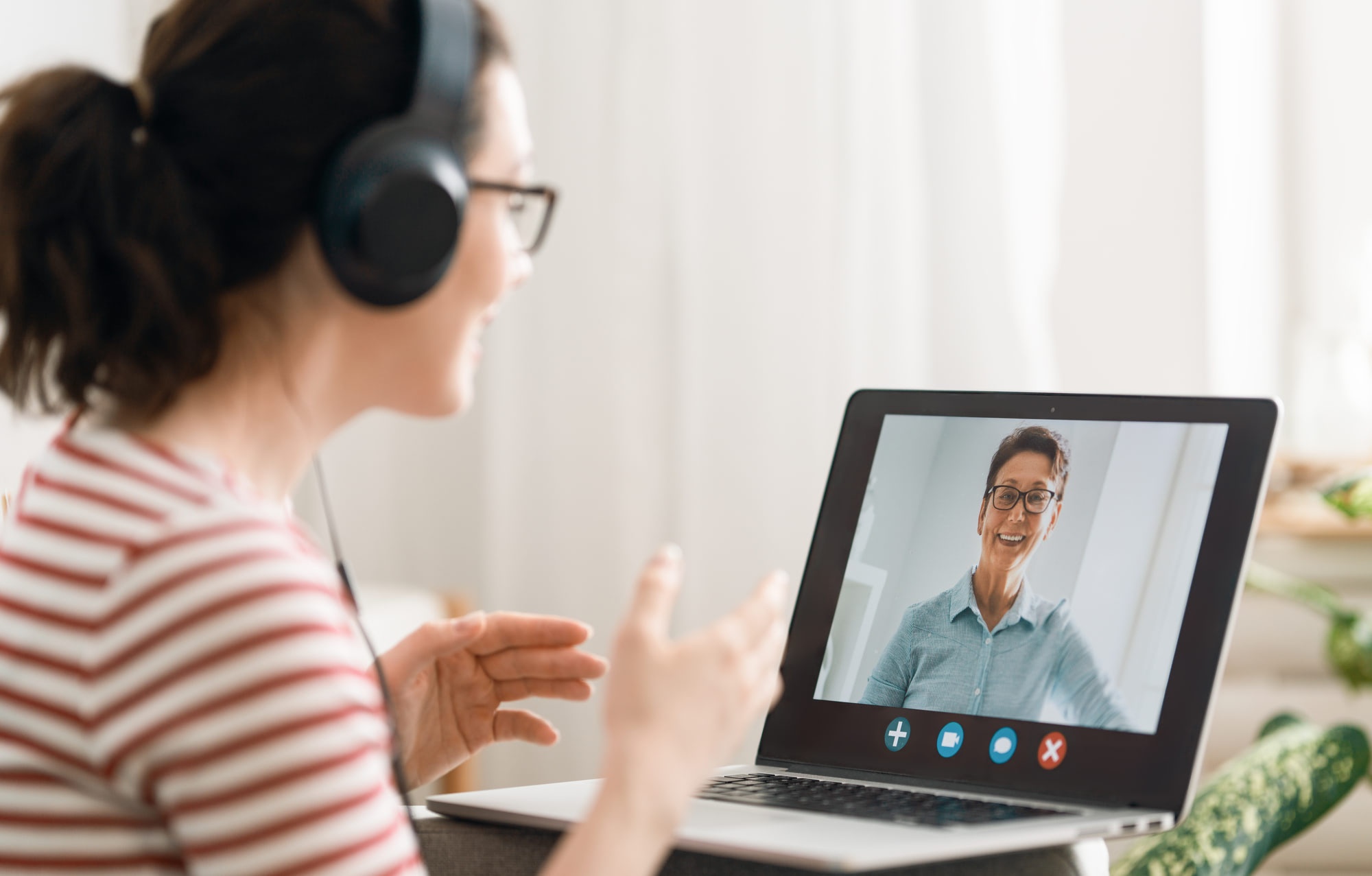 Modern technology is great … until it breaks. While you should feel optimistic about your performance during the interview, you should be pessimistic when it comes to your tech. Follow Murphy’s Law—“anything that can go wrong will go wrong”.

First, get to know Zoom a little. You don’t need to become a whiz, but spend an hour the day before learning the settings. Play around with the functions and make some mistakes. This is the time to experiment and press the wrong button—not on the big day.

Second, do a test run 30 minutes before the interview starts. Test your microphone and camera. If you do find technical hiccups you can repair right then—not when you’re about to go live.

Expect the worst to happen and have a back up. If your laptop crashes, can you continue the interview on your phone? Can you borrow a family member’s laptop if yours dies? If your broadband goes down, do you have a secondary internet connection (wireless or otherwise)?

You want to have plan D if A, B, and C fail. If things go awry for reasons outside your control, and yet you’re able to salvage the interview because you prepared, you will look super resourceful and organized to the interviewer.

Not multitasking applies both to your physical and digital actions. Don’t munch on some crispy sweet potato fries nor answer texts while you’re being interviewed.

While you’re in the interview, turn off all the email pings and phone notifications. When you’re talking to someone on the phone, and that person is multitasking, humans can sense that the other person isn’t listening 100%.

This can make the person feel disrespected. You don’t want to be looking beyond the screen and tossing out the occasional “uh-huh” during what could be a very critical 30 minutes of your life.

And don’t have any other programs running on your computer. Downloading or streaming takes up bandwidth and eats up your connection (and your attention).

Even having other windows open on your browser may make your computer hang and crash. Just keep it simple.

So those are our 7 tips to help you make the best first impression and convince a hiring manager to take a chance on you—via a video interview.

But, if you really want to accelerate your job interview skills, you need to learn the ‘insider game’ of recruiting. To help you, we’ve recorded a quick video that shares one secret from inside the world of hiring.

If you're seriously interested in fine-tuning your interview skills, check out our flagship course Owning The Interview.

Owning The Interview arms you with vital insights into how recruiters choose, assess and hire candidates.

But don't just take our word for it… find out for yourself. 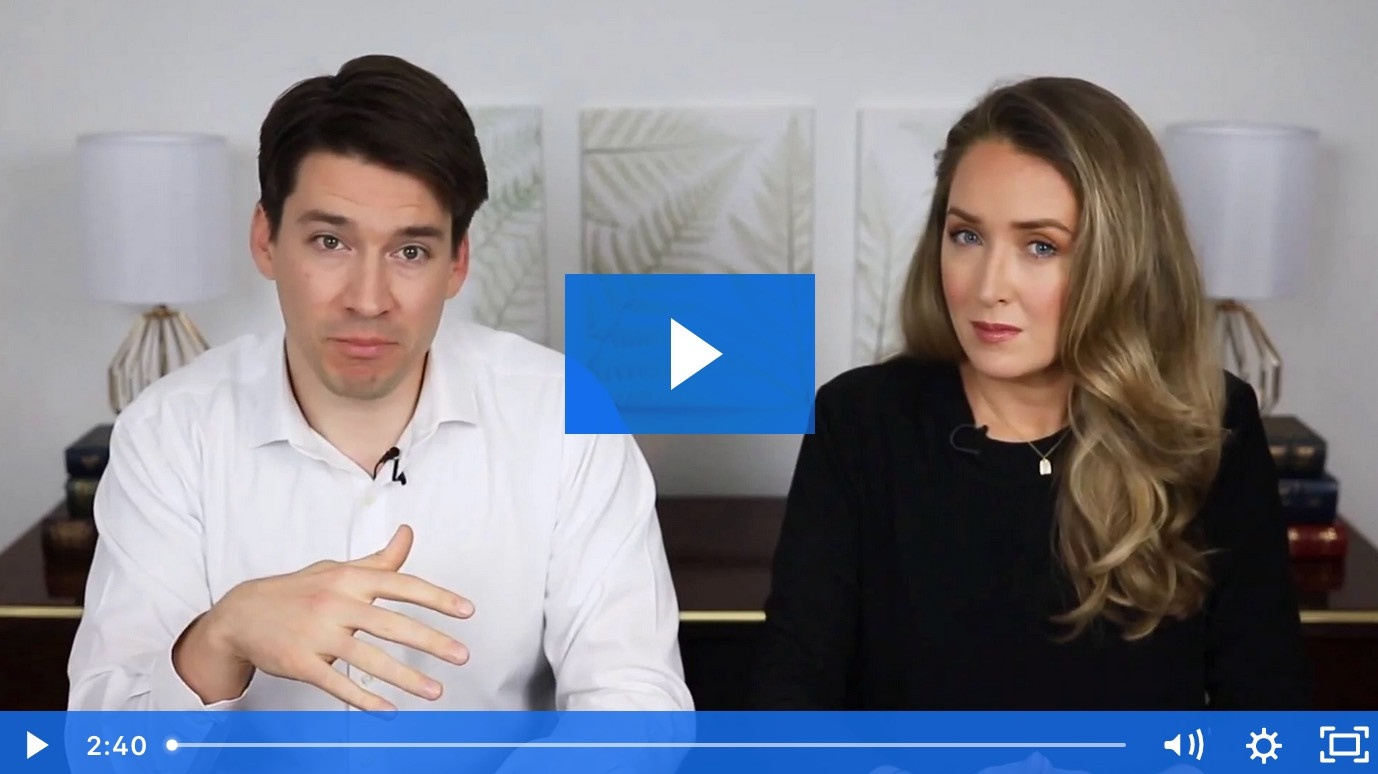 Get a sneak peek at the first of the FIVE Dirty Little Secrets of the interviewing process for a limited time.

*By submitting this form you agree to Owning The Interview contacting you about their products.